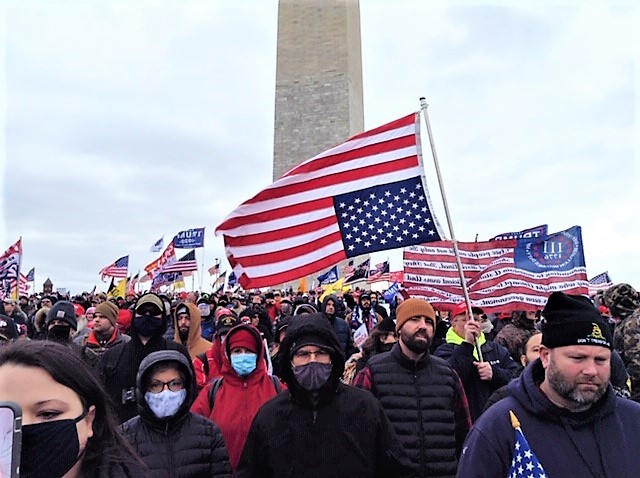 From The MoCo Conservative.

I participated in the protest and march in support of President Trump, election integrity (you know, where every ballot is verified by signature), and the Constitution (without it we are Venezuela; and no, that is not a good thing) on January 6, 2021. I spoke to countless patriots who traveled from all over the country and world, each with their own unique stories; a select few are published below. For example, I met an individual who had just arrived to show his support after a 15-hour flight from Israel. Why does this matter, you ask? Why are people flying from all over the world to support the one country standing in the way of the Communist Party of China (CCP)? I just gave you the answer.

This movement is worldwide; for those smug, insolent, ignorant, and intolerant liberals who are reading this post, you best be prepared for a lifetime of misery from “the other side of the political spectrum.” You have awakened a behemoth of rage in patriots (not all of whom are Republicans, by the way) who just want to be left alone and live their lives without the threat of communism looming over them. They are being smeared for falsely inciting and instigating violence while only truly “guilty” of exercising their Constitutional and God-given right to peacefully protest, which they did today and will continue to do.

I am one of those patriots being wrongfully accused, and I will not rest and will never stop sharing THE truth until every single corrupt elected official and crony (that’s you, media and the establishment) is arrested for treason and sedition. You foolishly thought that your blueprint for resisting President Trump was just going to die when Lyin’ China Joe “won.” Patriots are quick studies when it comes to the fine art of resisting, and they are just getting started.

I was expecting paid-off thugs to incite violence to smear this ever-burgeoning conservative movement, so I stood in the cold, as still as possible, to film a 25-minute, uninterrupted video of what the protest and rally were really about: peaceful conservative patriots from all over the country (and world) who support President Trump and the Constitution. This video below was recorded on Constitution Avenue as supporters left the Ellipse and headed to the Capitol Building after President Trump’s speech.